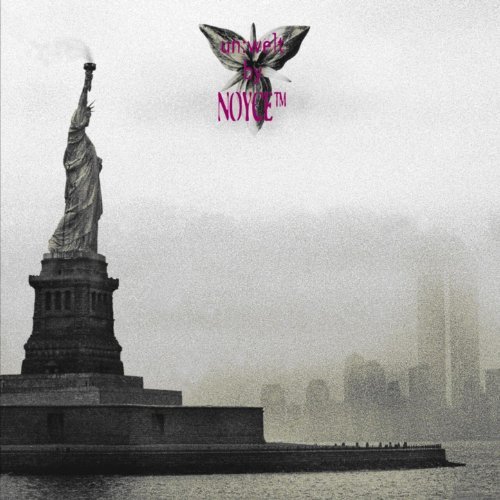 After seven years of silence German Electro pop project NOYCE TM returned with ‘Coma’ in 2006 and it was an impressive comeback celebrated by music critics followed by the ‘Our World in Coma’ EP in May 2007. After several push backs the third album ‘Un:Welt’ - again a conceptual work - is finally going to be unleashed on 27th March. In the following lines you can get a glimpse of what to expect.

The album opener is ‘Freiheit’, an instrumental entrée unfolding a minacious atmosphere tinctured into the symphonic emphasis of pounding drum beats and choirs, decorated with German speech samples pointing towards a topic I will pick up later on again. But first it’s about time for ‘This World’ to arise on the horizon where noise-injected beats pave the way to poignant, hymnal strings and melodies that are to accompany the listener from here onward drifting atop carefully crafted rhythms in the midst of which the question cuts surface “Why did we loose our believe in changes?” At which point did we just give up questioning what is presented to us and just take it all for granted? At some point it seems we just accepted that a political elite rules the country whose actions are more or less for their own benefit and to be perfectly honest I don’t see the end of this lethargy as of yet. The mechanic sounds in the opening of ‘Tagwerk’ for me reflect the sterility and frigidity that seems to spread more and more in our society with time making us a population of lone wolfs being hardly able to tie long-lasting emotional bonds. What has gone wrong? The feelings contained within the exclusively German lyrics are amplified through the emphatic voice of Florian and washes of symphonic strings coming to the front at the breathtaking chorus.

With ‘Inschallah’ (English: God willing) the Bosporus suddenly feels much closer. This feeling is evoked by a very special instrumentation atop the electronics that are about to reveal a darker face a few spells later and we learn about a child being sent into a “Glorious” death by its family. It is told it’ll be a hero and become immortal but it’s all just false pretence. It’s only about hate and hurting other people. The question I’m asking myself is: How can it be that parents purposely sent their children into secure death? Can there be any reasonable justification for that? No! This is just contemptible and deserves to be punished. These voices in the beginnings of ‘Un:Welt’ sound like the swan song of civil rights and ever since 9/11 happened they’re practically evaporating with every passing day. Not even Orwell could have pictured this dimension in his wildest dreams I guess. Cameras at every corner are already reality in some parts of the world and only god knows when it’s our turn. Our entire communication data is already being logged so it’s only a small step and it’s so much easier to control the “mob” if you know all their deepest secrets. “Welcome to Un:Welt!” Coming back to the music NOYCE TM have melancholic piano parts and a full-grown down tempo beat joining the aforementioned voices and you can’t avoid using the term hymnal again. It’s almost scary with which somnambulistic security they are able to bring forth these feeling in their songs.

She was found on a clinic toilet on 5th January 2004. Beaten, strangled, burned; in one word tortured. Closer to death than to life but despite medical intervention she left this world two days later at the age of 3. She never had a chance because her mother obviously didn’t love her enough to protect her from the unbridled rage and sadism of her boyfriend. It’s absolutely beyond my understanding how somebody possibly could do such an inscrutable thing to a little child and it stings my soul if I try to picture how she must’ve suffered before death eventually delivered her from all pain. It was tough to focus on the music with a song containing such lyrics as ‘Karolinko’ does. Eventually I succeeded though. There is a variety of drum sounds connected to sometimes fidgety and other times straighter rhythm patterns additionally moulded with a plethora of effects to underline gut-wrenching atmospherics. The concluding song ‘The Last Effort’ builds in a way a bridge back to ‘This World’ and this is not due to the repetition of the chorus in the last third. I feel it as a kind of continuation of the story in which it actually came to mankind freeing itself of this pool of lies. Also the melodies within the chorus of the mid-tempo song radiate hope and confidence, so you’re starting to think “Maybe there still hope for us.”

The expectations for the new NOYCE TM album were pretty high after the last two releases but with ‘Un:Welt’ they managed to go one better in every aspect of complexity in production and lyrics while retaining a remarkable catchiness within their eclectic compositions. Their best work to date!